Defragmentation is a process in the maintenance of file systems that reduces the degree of fragmentation. The defragmenting process physically organizes the contents of the mass storage device used to store files into the smallest number of contiguous regions (fragments, extents). It also attempts to create larger regions of free space using compaction to block the return of fragmentation during the process. For example, some defragmentation utilities like UltraDefrag ties to keep smaller files within a single directory together, as they are often accessed in sequence.

In other words, Disk Defragmentation is the process of joining fragmented data on a volume or hard disk so that it will work more efficiently. Over time you save, edit, or delete files from the hard disk, your hard disk gets fragmented. When you store data on the hard disk, it is stored haphazardly than the original file. After using laptop or computer for a few time, both the file and the volume itself gets fragmented, and it slows down as it has to work harder to find a single file in different places. 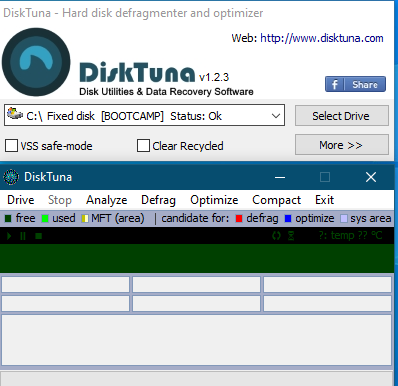 DiskTuna is a freeware software that lets you defrag and optimize your computer’s hard drive, thus increasing performance and boosting your Windows computer’s overall speed. There is no issue with the built-in Disk Defragmenter tool, but some prefer a third-party tool freeware tool to get more.

DiskTuna is a safe and reliable application as it uses the official Windows Defrag API to move around files. It features safe mode, boot defrag explorer integration, scheduling tasks, and a lot more. This software only runs when you want it to as it does not install any background services or other crapware that slows the system down.

DiskTuna is a complete solution for HDD optimization and defragmentation. Although you need defragmenting your HDD once or twice a month, if you don’t prefer to use the built-in disk defrag tool, DiskTuna freeware would be the right choice for you. It comes with a simple and easy user GUI (Graphical User Interface) so that a novice can also operate it.

You can grab this free utility from its official website.

How to Password Protect a PDF on Windows 11 or 10?

How to Prevent Users from Changing Proxy Settings in Windows 11 or 10?

How to Know if your PC is compatible with Windows 11 22H2?

How to Find Available Memory Slots on Windows 11 or 10?

How to Display Remaining Battery Time in Windows 11 and 10?